Women of Our League

Stay tuned for more details regarding this game.

What people are saying about WOOL

The WOOL game Is an excellent opportunity for women across the league to enjoy each other’s company while competitively playing Beep baseball. To me WOOL means friendship, family, and fun.

— Crystal Melero, #91 for the Bombshells

Beep baseball blows any excuse out of the water that you can’t do something because you can do anything if you put your mind to it. I like helping the Women of our League because WOOL gives the women a chance to shine and show what they truly can do.

— Cassie Nipp, #5, pitcher/catcher for the Bombshells

I’ve been playing with the Divas since the inception of WOOL in 2016. During that historic game in Ames, Iowa, I scored my very first run and had several put outs. Playing in a game with all women allows me to feel like a full contributor to our team. In a sport dominated by men, the presence and community that WOOL is promoting has led to more women joining teams and feeling like we are empowered to perform as full athletes on our home teams as well. I have loved developing friendships with women from teams from all over the NBBA and feel especially proud that every single player and volunteer for each game believes in the power of pink.

— Kirstyn Smith, #22 for the Dynamic Divas

Women of Our League (or WOOL) empowers the blind and visually impaired female population to compete on the ball field in the adaptive version of America’s Favorite Pastime. 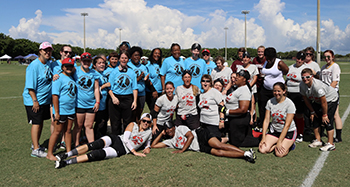 Kevin Sibson strategically chose Faith to demonstrate batting practice in front of 4,000 spectators with the legendary Pedro Martinez at the plate. A nice sounding hit, and the immediate crowd eruption ignited the grassroot movement regarding the present female experience in Beep Baseball.

At the 2015 World Series twenty-five females in the NBBA agreed that hosting an all-female game at the World Series would formally demonstrate female inclusion, celebrate empowerment and diversity for the sport, and improve membership morale. Moreover, the NBBA developed a WOOL committee identifying Coaches, Captains, and key leaders for the South West and North East regions of the US. In 2016, both teams organized themselves to compete against each other in the first documented all-female game in NBBA history.

The all-female game promises to incorporate an open-door philosophy, include all interested female-participants on the field, and demonstrate fair competition. All who are interested in playing, volunteering, or in any way participating in the WOOL game, The Southwest Bombshells and the Northeast Dynamic Divas invite all female players and volunteers of beep baseball to register with the WOOL project. 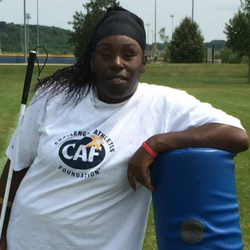 I’m Faith. Although I live and work in Austin Texas, I claim Dallas all day every day. Publicly I’m extroverted, privately I’m introverted. My job as an Employment Discrimination Mediator and Investigator is one of the most fascinating positions I have held. I never thought my career would be in this line of work, but it is, and I love it. When I am not working, I enjoy dancing, reading and playing beep ball, and that’s funny because I’m not much of a sports fan at all.

The Austin Blackhawks were introduced to me in 2012 and I attended my first Beep Baseball World Series in 2013; I haven’t stopped playing yet! To me, beep ball is freedom, trust, cooperation, and family. The Women of our League (WOOL) is all of those things and much more. Its unity, empowerment, competitiveness, diversity, liberation, an opportunity for women to get out there and give it all we got!

Serving on the WOOL Committee these last few years has been very rewarding, and as one of the founders of WOOL, it is something I hold close to my heart. WOOL has provided me with opportunities to create long lasting friendships, build networks, learn patience, and enhance leadership skills. Beep baseball is an amazing sport, and WOOL is something I hope to keep around for a long while.

My name is LaKisha Holmes and I am #3 on the SW Bombshells.

I currently live in San Antonio, TX with my boyfriend and our 2-year-old son and 1-year-old daughter. I am currently seeking a Master’s of Science in Clinical Rehabilitation Counseling at Texas Tech University Health Sciences Center in Lubbock, TX. I wish to obtain a job in the vocational rehabilitation field upon graduation. I love participating in the awesome sport of Beep Baseball because it grants me the opportunity to stay in shape, network with other blind athletes, and have fun. When I first heard of WOOL, I became very excited! It isn’t common for women to play much during a Beep Baseball game unless they are highly skilled. I knew that the creation of WOOL would allow women to take center stage and show everyone what skills they have. Being a part of the planning and leadership team of WOOL has been very influential for me. I have been able to build friendships and grow networks as well as gain an amped amount of leadership skills. I truly believe in WOOL and I am very excited to see what successes WOOL Will gain in the future.

I love participating in the awesome sport of Beep Baseball because it grants me the opportunity to stay in shape, network with other blind athletes, and have fun! When I first heard of WOOL, I became very excited! It isn’t common for women to play much during a Beep Baseball game unless they are highly skilled! I knew that the creation of WOOL would allow women to take center stage and show everyone what skills they have! 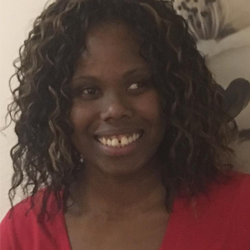 Hello! My name is Kalari Girtley Jackson. I play for the Dynamic Divas and I am number six. I also serve as the regional Northeast chair for the WOOL board. I play for the Chicago Comets and have been with that team since I was 16 years old. I am currently a customer service rep at a nonprofit in Chicago. I am also a proud mother of three beautiful children. I consider myself very outgoing, competitive and extremely friendly. I love meeting new people and especially ladies who want to play beep baseball. I also am a writer and try to do as much writing in my free time.

I first came to the sport of beep baseball when I was nine years old. I quickly fell in love with this sport and often I referred to this game as my first love! I often tell people this sport saved my life. I discovered it shortly after I lost my vision. This game allowed me to get a lot of my pent-up anger out and also allowed me to freely run again which allowed me to still be a child.

I consider myself to be one of the old-timers in the game. For years I was the only female player on my team, and one of the few women in an overly male-dominated league! This is why I was so excited to see the formation of WOOL. This was like a dream come true and it was wonderful to see after years of fighting for equal opportunity and play for females in this league. WOOL has allowed me to gain great friendships and develop a strong sisterhood in the game. It has always been my personal goal to get more women involved in the sport. We can show these guys girls can play too. 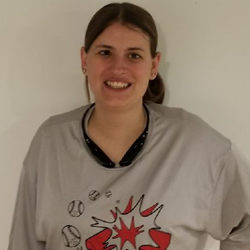 My name is Rebecca Lewis . I live in Indianapolis , IN . I am a wife and mother of two , as well as a criminal justice and human services student at Ivy Tech Community College. I’ve been involved with beep baseball for 6 years.

At first I played beep baseball for the physical exercise , but it didn’t take long for the sport to mean so much more to me. Many of the players and volunteers in the NBBA have become my second family. Working on the WOOL committee has been so rewarding. The strong, beautiful, hard working women that form the committee are very good friends to me. I look forward to our conference calls where we can collaborate on ideas such as fundraising, recruiting, and so much more.

The WOOL game Is an excellent opportunity for women across the league to enjoy each other’s company while competitively playing Beep baseball. To me WOOL means friendship, family, and fun.

The Southwest Bombshells (4-0) defeated the Northeast Dynamic Divas (0-4) with a final score of 3-1.

The Southwest Bombshells (3-0) defeated the Northeast Dynamic Divas (0-3) with a final score of 3-1.

The Southwest Bombshells (2-0) defeated the Northeast Dynamic Divas (0-2) with a final score of 6-2.

The Southwest Bombshells (1-0) defeated the Northeast Dynamic Divas (0-1) with a final score of 6-1.

Thank you for choosing to participate in the Women of our League annual exhibition game. Please complete the below form and a WOOL committee member will contact you with next steps. Players will be assigned to the Northeast Dynamic Divas or the Southwest Bombshells based on the state they reside in.

Thank you for your interest in Women of Our League! Please take a moment to fill out the short form below, and a member of the leadership and planning committee will reach out to you soon.

Get involved with WOOL

Contact a member of the WOOL leadership and planning committee