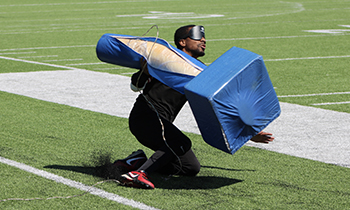 With the excitement of Eau Claire and the 2018 World Series now a fleeting memory for most, players and teams across the country are headed for the bleak, off-season months, where nary a beep or buzz is heard until spring.

But thanks to the hard work and compassion of Larry and Rosie Reed with the Tyler Tigers, teams from across Texas will head north on October 13 for the 10th annual Great Texas Shootout breast cancer and blindness awareness event. A staple of fall beep baseball for teams across the Lone Star state, the #8 Tyler Tigers will play host to the #2 Bayou City Heat, #3 San Antonio Jets, #6 Austin Blackhawks and the Lonestar Road Runners in a weekend committed to competition, comradery and commemoration.

Rosie Reed remembers scheduling their first community event over a decade ago, which was initially only held as a fundraiser and community outreach for the Tigers.

“It started off really small,” said Rosie Reed. “When you’re out their raising money for the World Series, nobody knows what beep baseball is. We wanted a way to show our community what this game was all about.”

It was not until its third year that other teams started showing up to the Great Texas Shootout. Rosie Reed remembers when Bobby Lakey and the Lonestar Road Runners made their trek eastward to participate in this exciting new tournament.

“Most teams are starting to hang up their cleats and call it a year,” said Rosie Reed. “As it started growing, we were excited to give our Texas teams another chance to get on the field before it cools off around here.” 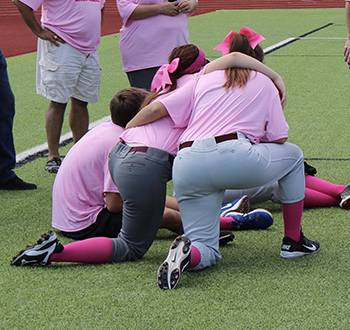 The Reeds knew quickly they wanted their event to be more than just another beep baseball game. October is breast cancer awareness month, which is a time to honor those who have battled with breast cancer, the third most common form of cancer and the second most common cause of death in women. The month also features White Cane Safety Day on October 15, which recognizes the independence and contributions of Americans with visual impairments.

In their work with Horizon Industries, the Reeds have a co-worker who is a breast cancer survivor. Rosie Reed said, “We wanted to honor her strength, because it takes more than what most of us have to battle something like that.”

“October just seems to be the month we recognize people who are strong,” said Rosie Reed. “The fight people have in them to overcome the odds and what the world says about them, it’s just something we wanted to celebrate with this event.”

The Great Texas Shootout has grown since its humble beginnings ten years ago. With teams from across the state, to reservations for a block of rooms in a local hotel, to bigger fields and facilities to house the festivities, Rosie Reed said “putting something on like this would be impossible without support of volunteers, the community and our team.”

“We will have food, entertainment, baseball and encouraging speakers to share the day with us,” said Rosie Reed. “We want people to consider what life is like for people who are dealing with things in our families, our jobs and our communities.”

Blake Boudreaux, president of the National Beep Baseball Association and 2018 defensive most valuable player with the #2 Bayou City Heat, said the Great Texas Shootout has always been a special and significant event for him as a player, league representative and two-time cancer survivor. Boudreaux said he knows “firsthand the battle many of our loved ones have to fight against this dreaded disease.”

“My cancer was the cause of my vision loss,” said Boudreaux. “I have dedicated many years of my life volunteering and raising funds to fight cancer and raise awareness of blindness.”

Boudreaux is excited to participate in this year’s tournament, and said “this is truly a family-friendly event that not only gives us all a chance to reflect and learn, but to compete in a sport we love.”

“Beep baseball is not simply a sport,” said Boudreaux. “It is an opportunity to change lives.” 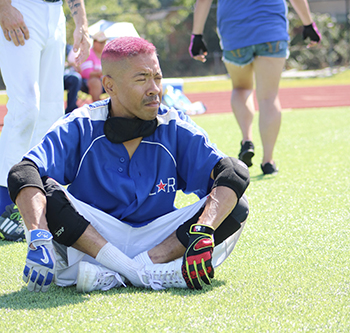 For the Tyler Tigers, this is another chance for the team to come together and work as a family. Tim Chappell, a defensive mainstay with the Tigers, participated in the tournament for the first time in 2017, saying it was “surreal to see all of those who overcame their cancer.”

“These people literally defeated death,” said Chappell. “I want people to remember why they’re there. When you see these survivors, go up and talk to them and let them know you care.”

Ron Jordan, a power hitter with the Tigers, also has a special connection to the Great Texas Shootout. Jordan’s stepmother, Erika, is a breast cancer survivor who was recognized during last year’s tournament.

Jordan, who was not playing beep baseball at the time, remembers the first time Larry Reed invited him to attend the Great Texas Shootout. Jordan said “it was awesome to watch these guys hit the ball and smash into the base. It was like a mix of baseball and football.”

“This tournament happens because of the spirit and strength of this team,” said Jordan. “Larry and Mama Rose work hard to put this thing on, and it means the world to those who come out and get involved.”

Rosie Reed is constantly reminding herself and her team that this event is special because breast cancer and blindness impact so many.

“You never know when it could affect you or your loved ones,” said Rosie Reed. “With this event, we want to impact people’s lives. Just when they think life is over because of cancer or blindness, you can show them that life goes on.”

Rosie Reed wants to thank the Tyler community, local businesses and the Lions Club for their generosity and support through the years. She is also grateful to Horizon Industries, who offers ongoing support to the Tyler Tigers, and who will also be hosting the White Cane Safety Day activities alongside the tournament weekend.

Other teams across the league are showing their solidarity in support of those who have endured breast cancer. Brandon Chesser of the Austin Blackhawks recently announced the team would be selling t-shirts for $20 to show support and raise awareness of the disease. Those interested in purchasing one of these shirts can contact Chesser directly via Facebook.

For more details about the 10th annual Great Texas Shootout, including location and a schedule of activities,, you can visit the Facebook event page for the tournament or contact Larry and Rosie Reed by email at tyler@nbba.org.